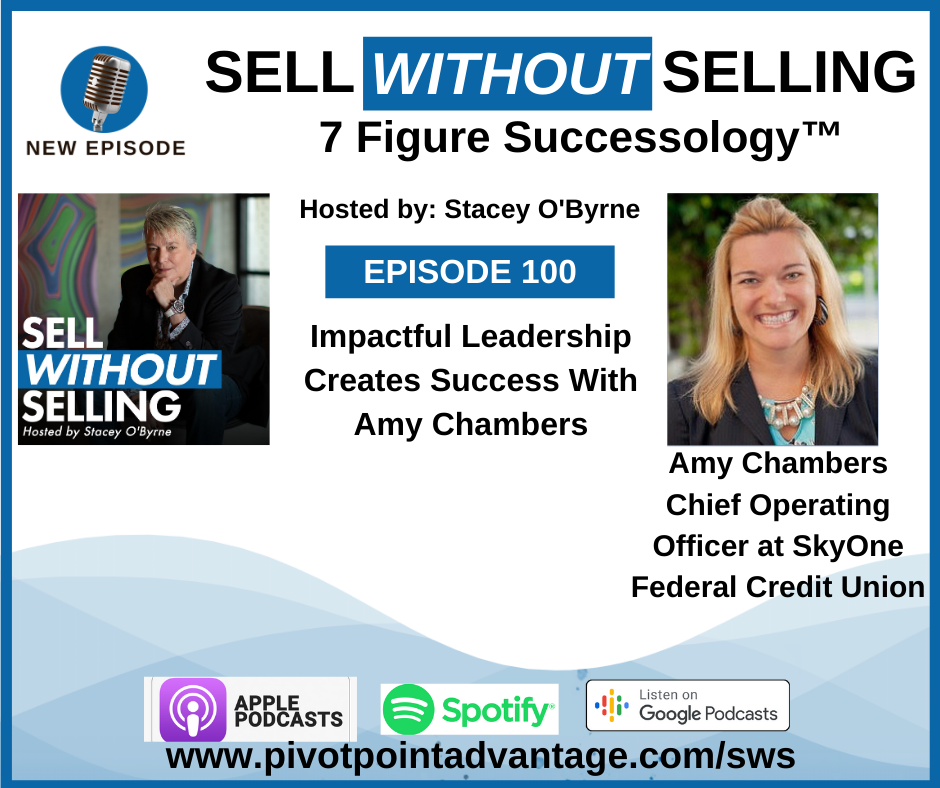 On this episode, Stacey is joined by Coach Amy Chambers, for a discussion on leadership career path, priorities, and the role sacrifice plays into being successful.

Amy Chambers has over 21 years of experience in the financial services industry and has spent 15 of those in leadership.

When she was just 17, one of the fathers of a family she babysat for, asked her to work for them every day during the summer before her freshman year in college. She declined, saying she “needed to get a REAL job”. The father then suggested she interview at “the bank”, to be a teller. She didn’t even know that this man WORKED at a bank, let alone which one. Then, Rich Gold was a District Manager of M&T Bank, a regional, Buffalo-based bank. Today, Rich Gold is President and COO of M&T Bank, which will become the 12th largest bank in the country after its current and ongoing $7.6BB acquisition of People’s United.

Amy took the teller job at M&T Bank, and worked as a teller during summers and breaks all throughout college. As a floating teller, she had the unique opportunity to work for a week or two at a time, at roughly 20 different M&T branches and observed an interesting phenomenon – even though each of these branches were part of the same organization and only a few miles apart- their cultures were wildly different. When she realized it all came down to the same one factor- leadership- her profound interest and obsession with understanding leadership was born.

In 2004, upon graduating the University of Notre Dame with her BA in Political Science and Philosophy, she joined M&T’s Management Development Program, and worked in the DC Metro area for the next 3 years, holding each and every role in a branch, including Branch Manager. She obtained her investment securities and insurance licenses and found a true love for wealth management, as well. In 2007, she relocated to Southern California so she could pursue her MBA at the USC, where she concentrated in Marketing and General Management and spent a few years as a Branch Manager at both Wells Fargo and US Bank. She’s been a part of numerous clubs, organizations, and boards both during her time in school, and after including Director of Communications for multiple Alumni Clubs.

By the time she was 28, she was managing a 15-branch territory and overseeing 260 people for Bank of America, and has held numerous District Manager and Regional Director roles- before ultimately becoming a Chief Operating Officer for a credit union. She still keeps in touch with Rich Gold, especially now, since they hold the same title!

During her years as COO, her organization has grown its assets at a rate of nearly 20% annually from $465MM to $605MM in its first 1.5 years with the help of Amy’s leadership. Throughout her career, she’s led over 500 people to success. She’s worked with and for every kind of leader imaginable, and in her two decades of observing, studying, coaching, and mentoring others- she’s developed a framework of principles that work, every time, to help transform culture, engage people, and deliver results- EVERY TIME.

After losing her most beloved uncle to ALS in 2015 and also going through a traumatic breakup that same year, Amy made a decision to transform her mindset and put hundreds of hours into studying the principles of mindset, satisfaction, happiness, and fulfillment. She worked to overcome fear, take control of her destiny, and pursue goals she had only dreamt of- but never quite made reality.

Amy trained herself from being unable to run a mile without having to walk- into a marathon runner. In the past 6 years, she’s ran 166 half marathons, 9 full marathons, and hundreds of other races, totaling almost 10,000 miles. She also became an avid skier- something she was once deathly afraid to do. Amy is a long-time cyclist, rollerblader, tennis player, and photographer. Some of her favorite accomplishments include a gallery opening she hosted for her photography and biking a few 100-mile centuries. In 2020, she bought her dream home, and currently resides in Long Beach with her boyfriend of 4.5 years, David.

Amy prides herself on reading a book every single month

Hey, this is Amy Chambers, and if you want to learn the six and seven figure science to success, significantly increase your revenue, and learn how to successfully build professional relationships, you should be listening to the Sell Without Selling Podcast with my good friend, Stacey O’Byrne.

Hey. Welcome back to another episode of Sell Without Selling. I am your host, Stacey O’Byrne and I believe that learning the art and the science of how to sell without selling is the only way to achieve high six and seven figure success.

I am really excited to get into today’s episode. Really quick, if you are a business owner, entrepreneur, or sales professional, and you haven’t hit the level of success that you wanted or needed, or if you’re stuck and needing a pivot in your success, or maybe you just want more and you understand the importance of having a coach to help identify the blind spots, increase accountability, and help with success strategies to take you, your business, your income, and your success to the next level. If this sounds like something for you, then head over to pivotpointadvantage.com/IWantSuccess. There is a quick application there that will lead to  a personal phone call with me to see if we are a great fit for each other. Alright, let’s do this.

Stacey: Amy, welcome to the show.

Amy: Thank you so much, Stacey, and thanks for the wonderful bio. It got me excited just hearing about it. Awesome stuff.

Stacey: I know, it’s like I get so excited I can’t wait to meet the person. Oh yeah, I already know her. So how are you?

Amy: I am doing wonderful, as always. Everyday is a choice, and so choosing to be happy is how I start my morning every day – so doing great.

Stacey: I love that. As a matter of fact, our tagline is choice is a powerful thing and suffering is always optional. So that is phenomenal. So I’d like to introduce our listeners to you because I have the pleasure of really knowing you. Something that really impressed me was how many times you made the dean’s list. You made the dean’s list 7 out of 8 times, right? What does it take to really strive for excellence like that? What does it require of you? Was that a goal you had set? Share that with us.

Amy: Sure. Probably the first thing that got me motivated is my parents told me that if I didn’t make the dean’s list they were going to stop helping pay for it, so that got me fired up quick. I half joke, the first semester was the one I didn’t make it, and we had quite the conversation when I came home for freshman break. But, you know, a few things happened. So first things first, I started off in what I thought someone else wanted me to do. I started off as a biology, chemistry double major – pretty aggressive schedule for a young freshman at Notre Dame. I came in thinking, “I am smart. This is going to be a cake walk,” kind of like how high school was. I immediately found myself surrounded by valedictorians and salutatorians of the best schools all over the country and I suddenly was, “Oh gosh. I’m a small fish now in a big pond.”