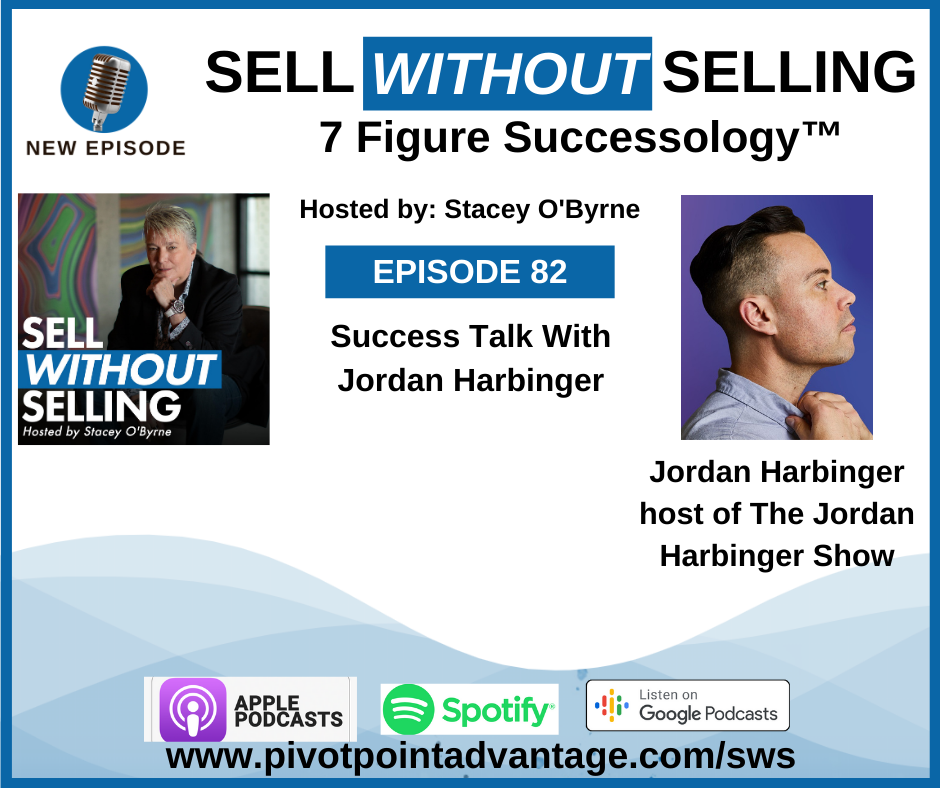 Stacey is joined by podcasting legend Jordan Harbinger for a conversation about leaving the corporate life, being comfortable in sales, and the magic of relationship development.

Jordan Harbinger is a Wall Street lawyer turned podcast interviewer with an approachable style and knack for securing high-profile guests. His show, The Jordan Harbinger Show was selected as part of Apple’s “Best of 2018.” The lawyer that would never be
Hailing from Michigan, Jordan was an inquisitive kid who was fascinated by the internet at an early age. He went to law school at the University of Michigan and landed a job on Wall Street as a corporate lawyer.

Jordan wasn’t interested in climbing the corporate ladder. But he was curious about a partner who was never in the office. Dave spent his days at charity events and playing racquetball. How did he keep his job? Dave told Jordan that he brought in business for the firm. To do that he didn’t sit at his desk: he spent his time building and managing personal relationships. After hard work and intelligence, Jordan felt like he was learning a “secret third path” that nobody ever talked about.

This kicked off an obsession with body language and non-verbal communication, persuasion, influence, social psychology and networking. When he started uploading what he learned to the web, he inadvertently became one of the first podcasters. Today, The Jordan Harbinger Show has over 11 million downloads per month and features a wide array of guests like Kobe Bryant, Moby, Dennis Rodman, Tip “T.I.” Harris, Tony Hawk, Cesar Millan, Simon Sinek, Eric Schmidt, and Neil deGrasse Tyson, to name a few. Jordan continues to teach his skills, for free, at 6 Minute Networking. In addition to hosting The Jordan Harbinger Show, Jordan is a consultant for law enforcement, military, and security companies and is a member of the Northern California Chapter of the Society of Professional Journalists.

“I realized when I got to college, that everyone was as smart or smarter… so I had to out-work these people.” -Jordan Harbinger

Hey, this is Jordan Harbinger, of the creatively titled Jordan Harbinger Show, and if you want to learn to sell without selling, check out the Sell Without Selling Podcast with my friend, Stacey O’Byrne.

Hey. Welcome back to another episode of Sell Without Selling. I am your host, Stacey O’Byrne and I believe that learning the art and the science of how to sell without selling is the only way to achieve high six and seven figure success.

I am really excited to get into today’s episode. Really quick, if you are a business owner, entrepreneur, or sales professional, and you haven’t hit the level of success that you wanted or needed, or if you’re stuck and needing a pivot in your success, or maybe you just want more and you understand the importance of having a coach to help identify the blind spots, increase accountability, and help with success strategies to take you, your business, your income, and your success to the next level. If this sounds like something for you, then head over to pivotpointadvantage.com/IWantSuccess. There is a quick application there that will lead to  a personal phone call with me to see if we are a great fit for each other. Alright, let’s do this.

Jordan: Of course. Yeah, I am happy to be here. I think it’s going to be a fun one.

Stacey: So Jordan, I’d like for our listeners to get to know, if they already don’t. But with the number of downloads that you have, that’s probably highly impossible. So how did you get into this entrepreneurism? Where did it all start for you?

Jordan: So for me, the reason that I became an entrepreneur – first of all nobody even called it entrepreneur back when I started. I mean the word existed, obviously, but nobody was really using it like they are now. I used to be an attorney. I worked on Wall Street. Well, let me back up the truck a little bit. When I was in high school, I was the kid who like roll into the geometry test and sort of figure it out 15 minutes before the test, take the test, get a B or B+, and I was like – “I’m fine. C’s get degrees, man!” And then when I was in college, I realized uh oh – everyone is kind of that level of smart or much smarter in many cases. I can’t do that anymore. So I started to work a lot harder, and I thought, “Okay, at least I can outwork these people.”

But then I got to Wall Street as a lawyer and everyone here is really smart, and everyone here is willing to work 16 hour days, 7 days a week plus travel, or whatever it is. And I thought, “Uh oh. My competitive advantage is gone. I can’t make myself smarter, so that’s out. I can’t work 21 hours a day instead of 20. That’s not physically possible, really.” And you’re never really going to be hungrier than the person who’s there from Bulgaria and who’s family is still stuck there.