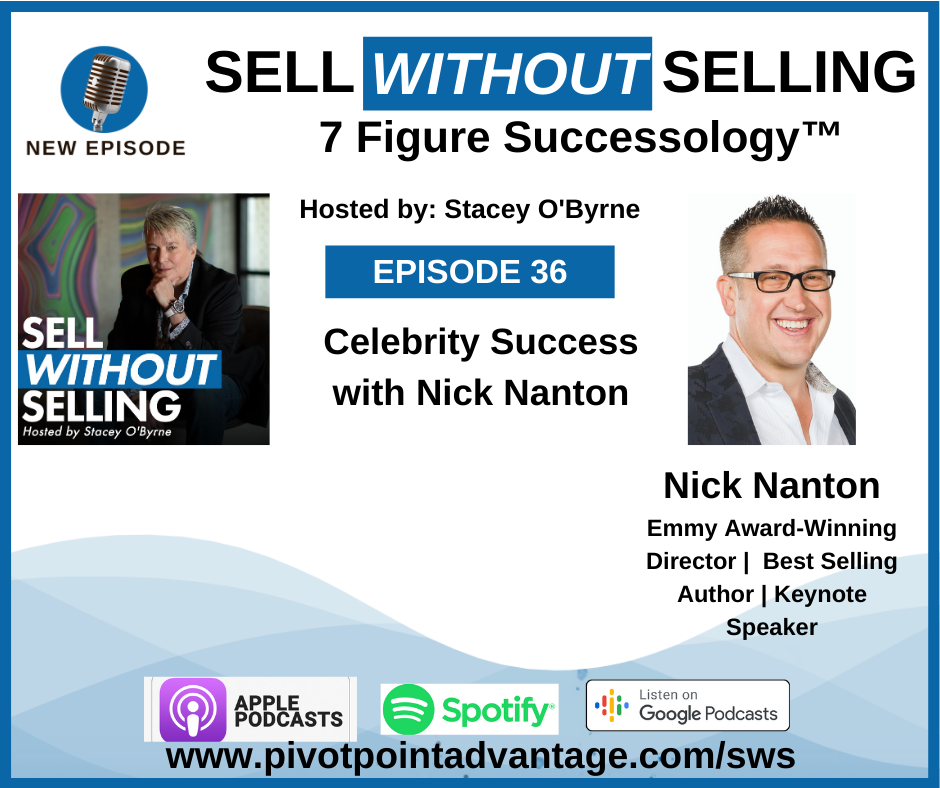 3 ways to learn from “failure” and move forward:

An Emmy Award-Winning Director and Producer, Nick Nanton, Esq., produces media and branded content for top thought leaders and media personalities around the world. Recognized as a leading expert on branding and storytelling, Nick has authored more than two dozen Best-Selling books (including The Wall Street Journal Best-Seller, StorySelling™️) and produced and directed more than 60 documentaries, earning 16 Emmy Awards and 36 nominations. Nick speaks to audiences internationally on the topics of branding, entertainment, media, business, and storytelling at major universities and events.

Hi, Nick Nanton here from DNA Films and the Celebrity Branding Agency. If you really want to learn the science to creating six and seven figure businesses, significantly increase your revenue, and learn how to successfully build a professional organization and relationships, you need to be listening to Sell Without Selling podcast with my good friend, Stacey O’Byrne.

Stacey: Alright, Nick. Welcome to the show. Thanks for coming on.

Nick: Thanks for having me. I’m excited to see where we’re going to go today.

Stacey: I know, you and me both. I’ve got to tell you, I have loved working with you. I’ve loved getting to know you. I’ve loved all of the conversations we’ve had in the bars, and I am really, really excited about our listeners to get to hear you. Because, you know, this entire show is about playing big. This entire show is about creating the successes you’ve always desired, dreamed of, and deserved. And so few hit that level, and you’re not afraid to play big. So I’d really like for them to get to know you. So how did you go from being a lawyer into branding?

Nick: I’ll give you the short version of a long story. I’ve been a musician since I was a kid, a songwriter, produced records, that’s all I wanted to do. I wanted to be the president of a record label. We’re immigrants. My brother and I, my family is from the islands. We were born in Barbados. My family has been there for 300 years, and my dad’s from an even smaller island called St. Vincent. And so we moved to America when I was 1 and my brother was 3, right around then. My parents said, “You can do anything you want in life, but get a profession.” And so we both said it’s not in the cards for us. My brother was an actor and a play-write in high school. But then he went off and became a child forensic psychiatrist. And so he’s boarded in 3 different specialties and I said, “Well that ain’t going to happen for me.” And so I figured I could get into law school. I actually had a plan, I would say I thought about it from high school – “Hey if I could get a law degree, a lot of CEO’s of major businesses have a lot of degrees…” So I actually did undergrad in about 2 and a half years because I had a bunch of credits going in from high school. I just didn’t like school because I could get through it, I could do pretty well at it, but I am much more of a hands on person. I was building businesses from the time I was in high school. I had a t-shirt printing business my freshman year of college and made $70,000 a year doing fraternity and sorority t-shirts. So I just like the engagement of providing value to people and getting paid in return for it. So school – just the reading, the writing – it just wasn’t really for me. I felt like it was necessary, and I also thought that a law degree could help me get a leg up. And by the way, I went to law school and never planned on practicing a day in my life. I’ve done a little here and there, but I really haven’t practiced law really full-time, which thank God, because I am not really designed for that.