Skip to content
SWS – Ep #14: Build Your Network for Success with Travis Chappell 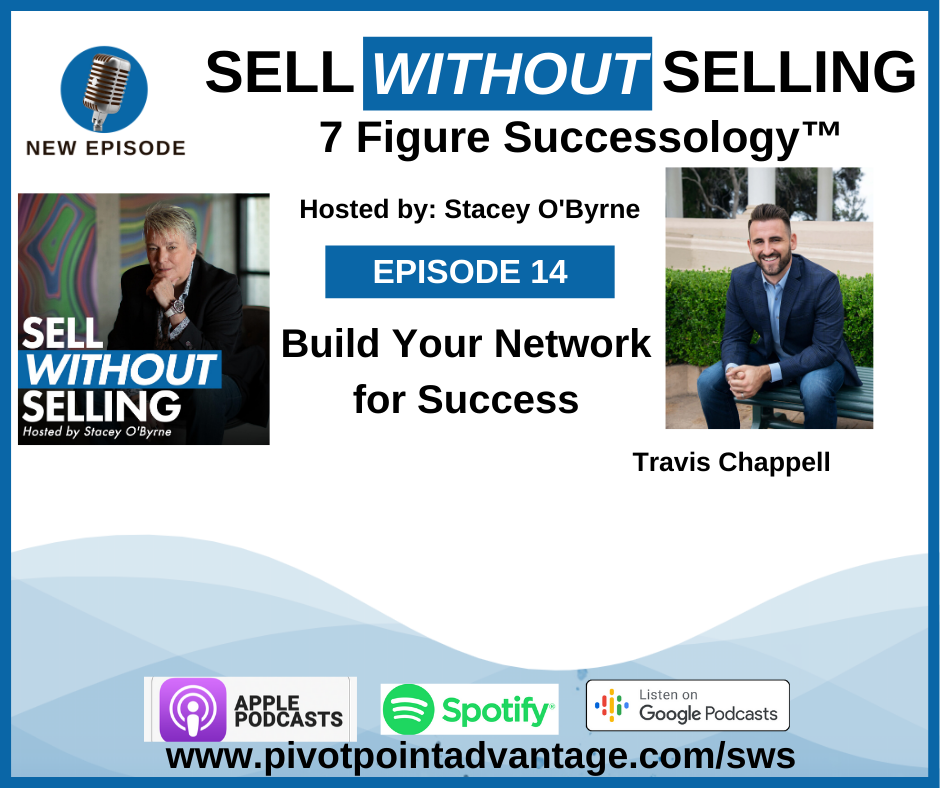 Build Your Network for Success with Travis Chappell

Travis Chappell has made it his mission to help a million people cultivate genuine relationships the right way.

He has found that there are two types of people: 1.) Those who think they are networking properly, but are actually really annoying everyone they come in contact with by barfing their elevator pitch, throwing a business card or five in your face, and moving on to the next person (I call that person Networking Ned) and 2.) Those who hate Networking Ned so much that they avoid the practice altogether, for fear of becoming that person.

After publishing over 400 episodes of his show, Build Your Network, Travis has picked up on a few secret techniques and strategies that will help you ditch the fear of networking, avoid becoming Networking Ned, and build genuine relationships that will unlock the next level in your life.

““Anytime I even thought about giving up, I turned around and looked at who was watching me.”” -Stacey O’Byrne

Hey what’s up, this is Travis Chappell, founder of Build Your Network, and if you want to learn the six and seven figure science to success, significantly increase your revenue, and learn how to successfully build professional relationships, you should be listening to the Sell Without Selling Podcast with my good friend, Stacey O’Byrne.

Stacey: Travis, thanks for joining us. How are you?

Travis: I am doing really well, Stacey, how are you? Thanks for having me.

Stacey: I’m doing fantastic. Thanks. So, I’m really glad you could be on the show. I know how busy your schedule is, and I know you’ve got a lot to share with the listeners. I personally have had experience with you, so I am excited that they get to hear you.

Travis: Oh yeah, I’m super, super happy to be on. As soon as you threw the invitation out there, I was stoked to schedule some time in there and make it happen.

Travis: That’s a good question. For me, it was just my back was kind of against the wall. I don’t know how much you know about how I grew up or whatever, but I grew up in a very strict, religious background, a strict, religious culture/community. I say community because I grew up going to the same place basically 7 days a week. My school was on the same campus of the church that I went to. They had their own K-12 school, as well as a college. So I graduated Kindergarten, 8th grade, high school, and college on the same 20 acre campus. It gives a different definition to growing up in a “bubble,” because that’s definitely how it was for me. So, growing up there’s really 2 options. It was like you are either going into ministry, or you’re not going into ministry. So, if the option that you chose was not ministry, there wasn’t any sort of further guidance from there. It was like you’re going to ministry and if you go to ministry we have a college on our campus that teaches ministerial degrees. It was zero “secular” degrees. It was all ministerial degrees. It was either go this route, and if you go this route here’s your application, because the college is right next door to the school on the same campus as the church. If you’re not going this route, then good luck. There wasn’t ever anybody sitting there, there’s no career counselor going, “Well, if you want to be an engineer, you need to get these grades, apply to these schools, get these transcripts.” There just wasn’t any of that kind of stuff.